Vulvodynia: What is it?

May-Grant Obstetrics & Gynecology Contents Vulvodynia: What is it? 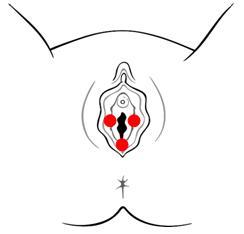 Vulvodynia, simply put, is chronic vulvar pain without an identifiable cause. The location, constancy, and severity of the pain vary among sufferers. Some women experience pain in only one area of the vulva, while others experience pain in multiple areas. The most commonly reported symptom is burning, but women’s descriptions of the pain vary. One woman reported her pain felt like “acid being poured on my skin,” while another described it as “constant knife-like pain.”

There are two main subtypes localized and generalized vulvodundia which, sometimes co-exist.

What Is Localized Vulvodynia?

Most women have pain at only one vulvar site. If the pain is in the vestibule, the tissue surrounding the vaginal opening, the diagnosis is vestibulodynia (formerly known as vulvar vestibulitis syndrome (VVS)). (See diagram on right.)

The majority of women with localized vulvodynia have Provoked Vestibulodynia (PVD), in which pain occurs during or after pressure is applied to the vestibule, e.g., with:

A less common form of localized vulvodynia, known as clitorodynia (pain in the clitoris), can be very painful.

PVD is further classified as primary or secondary.

Women with primary PVD have experienced vestibular pain since the first attempt at vaginal penetration.

Women with secondary PVD have experienced pain-free sexual intercourse prior to the development of vulvar pain. 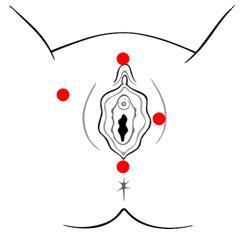 What Is Generalized Vulvodynia?

For women with generalized vulvodynia (GV), pain occurs spontaneously and is relatively constant, but there can be some periods of symptom relief.

Activities that apply pressure to the vulva, such as prolonged sitting or sexual intercourse, typically exacerbate symptoms.