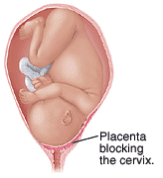 Placenta previa is a condition that may happen during the second or third trimester of pregnancy. It’s one of the most common causes of vaginal bleeding during these trimesters. It happens when the placenta implants in the lower part of the uterus. This causes the placenta to block part or all of the opening of the cervix to the vagina (birth canal). It can lead to problems for both the mother and baby, including blood loss and premature labor.

Factors include the following:

Placenta previa can cause painless bleeding during the second or third trimester. If this happens, an ultrasound test can confirm the problem. But the problem can be present without bleeding. So your healthcare provider will check the position of the placenta during routine ultrasound exams.

Depending on the amount of bleeding, the type of placenta previa, and the stage of the pregnancy, the following treatments may be recommended:

Even if you are not on bed rest, your healthcare provider may ask you to restrict your activity. You will likely be told to: